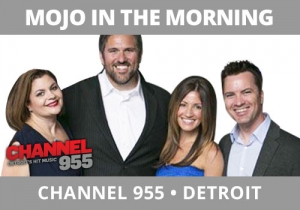 So Hillary Clinton agrees to come on your show to look for votes, considering your state’s primary is that day.  Great score, right?  If you’re Mojo in the Morning, Channel 95.5, Detroit, you know that just getting her isn’t enough.  First the question of what you’ll talk with her about (don’t do policy…it’s not your brand and something everyone else would do).  Then ask:  what can we do with our one shot at a potential presidential candidate no one else will do.  What can we weave into this interview that’ll entertain our audience (and drive the PD of our competitor crazy because we thought of it)?  Enter Eric Harthen, who surprises Hillary with his imitations of Bill Clinton and Donald Trump.  Everyone is in on the joke dso it doesn’t come off as fake.  Listen as the show changes Hillary the Politician to Hillary the Human Being.  If you were a listener and heard this break, would you leave talking about it?  You bet you would.  Audio of the full break is below, as well as video of Eric doing his voices during the interview.

Hot List March 7, 2016 The Most Interesting Man… Scroll to top