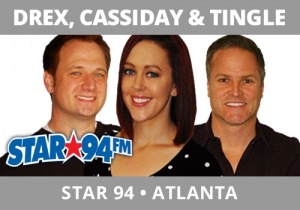 Have you ever been around someone who won’t stop talking about golf?  Drex, Cassiday, and Tingle, Star 94, Atlanta, know someone who won’t and he’s on the show.  Drex lives, eats, sleeps, and breathes golf.  So imagine the morning after The Masters.  Drex found a way to work golf into most on-air breaks.  This became a game the day after where a listener had to guess how many times Drex mentioned The Masters during the Monday show.  The audio below is the production piece their producer, JP, put together to prove it.  It’s very funny, quite relatable for women, and positions Drex as just like a husband of the audience.