Imagine a total stranger walking up to you on the street and baring their soul.  Telling you a story of great weakness and vulnerability in their life.  That would be odd, right?

But that’s exactly the kind of relationship we want with our audience. They’re total strangers to us, yet we aren’t to them.  Which is one of the key elements that makes a personality successful.

A pivot point for top talent happens incrementally as you nurture that relationship with listeners.  How?  By building trust and showing your humanity.  Trust is built with them the same way you build it with your close friends and family.  Through honesty and vulnerability.  Trust is a product of vulnerability over time.

Which brings me to the school shootings in Uvalde, Texas.  I am no longer under the belief that we can ignore these events.  They are happening in our listeners’ lives, and we must acknowledge this fact rather than run from or fear them.  But what you do solely rests on the kind of relationship you have with the audience. 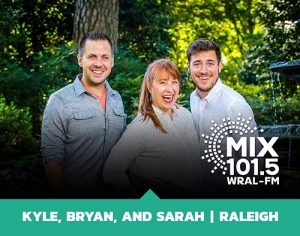 Encouraged by their great managers (Brian Maloney and Sammy Simpson), Kyle, Bryan, and Sarah, WRAL-FM, Raleigh, have worked tirelessly to have this kind of relationship with their audience.  From an on-air discussion about what happened in Uvalde, they received that unexpected call from a total stranger – a local woman who was in the Columbine school shootings several years prior.  She was encouraged by her kid in the back seat to call the show as they were listening to share her experience given the on-air conversation.  More humanity and compassion.  A story that resonated with the team and proves how comfortable that total stranger was to honor her relationship with those guys by baring her soul.

Hear that call here and feel the emotional connection this show is building with its fans.

Don’t believe me?  Here’s an unsolicited text the show got from yet another listener (another stranger) that says it all:

I’m sure it’s not lost on you, but just in case, I wanted to mention this.  You three (and the station) have created such a positive/fun environment that she was able to not only listen with her kids on a regular basis but felt safe and heard enough to call in and have an open conversation without any solicitation after what she went through in ’99.  I hope you all remember that that’s a testament to the foundation you all have built over the years.

That pivot point, groomed over the long term, is one of the reasons this show has been number one in every demo for nine consecutive months.

What kind of relationship does your show have with its audience?  Is it part of your strategy to win?  How are you working on that every day?

My favorite part of coaching is watching talent epically connect the dots like this and level up.

Makes me proud to be in radio.