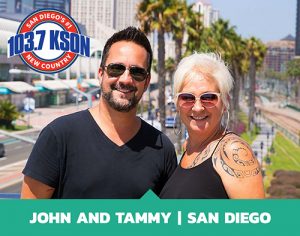 Would you, could you do a break like this, as heard on John and Tammy, KSON, San Diego?  John’s dad had been in failing health for some time.  This is a show that keeps no secrets from its listeners.  They are intimately aware that when you move the audience to care about you (and in turn you care about them), the show becomes important.  Radio is the most intimate form of mass communication there is.  Thousands of listeners at any one time based on numbers from Nielsen.  But in reality, we all know our strength is that it’s really just that one person experiencing it when they listen.  The audience traveled the journey with John and his father over the many years this show has been on in San Diego.  The countless times John would have his father on for many reasons, they were quite aware of the bond between the two, even when John was making fun of him.  So it was appropriate that John include listeners on his last days, too.  Here is a break of John talking about his father a few days after he lost him.  The description of his last few minutes are incredibly powerful and could only be done by a talent experienced and seasoned and one comfortable to do so.  This is emotional, balanced, and radio at its most powerful.  Do you have this kind of relationship with your audience?  You’ll win bigger if you do.