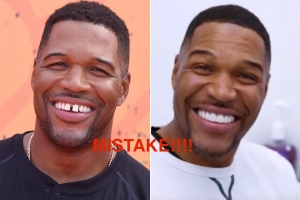 Michael Strahan removed the gap between his front teeth, and I can’t figure out why.  It’s one of the distinguishing physical characteristics of the NFL on Sunday and Good Morning America host.

Why would someone erase something that made them different?

Ries and Trout talk about points-of-parity and points-of-differentiation in their iconic book, The 22 Immutable Laws of Marketing.  They ask the question, and I, in turn, ask every personality I work with:  what is noticeably different about what we do that helps us stand out?

To the audience, we live in a “sea of the same”.  That’s our starting point to the uninitiated.  That we’re another “him and her” morning show that talks a lot and has wacky bits.  Our job over time is to develop bold points-of-differentiation to separate ourselves from our competitors and define the images we want to be known for.

So, I engage every show on this:  besides you, what do we do that no one else does?  What makes us stand out?  As someone who’s sat in his share of focus groups, if listeners cannot answer this unaided, you’ve got some trouble.  Find those points-of-differentiation.  The more you have, the more distinct you are

Listeners only get big things – nuance never cuts through.  Saying you do a phone topic every morning at 6:50 won’t cut it.  Here are examples of what will:

The entire thing turned out to be an April Fool’s Day prank Strahan pulled to cause talk (that was big and different).  Had he actually erased the gap, it wouldn’t have made him any less interesting or engaging.  But it would have taken away a trait that made him look different.

As Seth Godin said recently, distinctive isn’t easy, but it’s worth it.

It might be an interesting strategic exercise to sit with your morning show and list your true points-of-differentiation.  They need to be big.  The longer the show’s been on, the more you should have.

Hope you have a decent list.  Unless I’m competing against you in the market with another show.