You know where I’m going once I get my second Covid shot? To Staples to have my card laminated for free. You know how I know to do that? Staples is smart. They placed themselves in the topic and then every radio show I listened to told me.

Staples isn’t dumb. They know people will go in for their free lamination and buy something else.

Once done at Staples, I’ll probably head to Krispy Kreme, show my laminated vaccination card, and get my free donut. Who goes to Krispy Kreme for one donut? Anyone with even a marginal pulse buys a dozen. Sold! They did the same thing – put themselves in the story to create talk. Every radio show I listened to told me that, too.

When are we going to create talk for ourselves? It’s easy to come up with phone topic after phone topic as content for a show. The harder part, and the thing I work with shows overtime on, is knowing what’s going on and placing ourselves in the middle of it so we become the story.

I work with Sander Hoogendoorn, the morning guy on 3FM in the Netherlands. I love Sander. He’s very creative and brought to one of our Skypes the idea on the right. Unless you know Dutch, that long hashtag in the picture says #showyourshot. Once listeners get their vaccine, we’ll give them one of those bandages on his arm and ask them to send us a picture of themselves showing us their shot. It’s our way of inserting ourselves into the story to create buzz through images which will all be placed on our social media channels to positively influence people to get their vaccines. They’ll talk about us!

Two shows I work with the US decided to do this campaign. I’m proud of Lexi and Banks at K-BULL 93 in Salt Lake City. Along with PD Travis Moon and operations manager Chris Hoffman, we’ve launched the campaign with our goal being the same as Staples and Krispy Kreme – be in the moment in a unique way that’ll cause talk for the show and station. 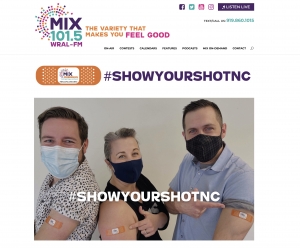 Another show doing this is Kyle, Bryan, and Sarah at MIX 101.5 (WRAL-FM), Raleigh. We have a dedicated website and have already gathered pictures of people who are doing it. Visit the site here. It also owns all our social media channels so more people know about it so we get credit.

As you start scrolling, you’ll see images of folks you don’t know. Those are all local celebrities we approached weeks ago, asking if they’d endorse our campaign because we have the serious mission of being the most local show in the market. Listener’s pictures are all over our social media channels. Bravo to PD Sammy Simpson and Brian Maloney, the market manager, for helping figure out how to do it big.

This idea has sales implications, too. Ways to monetize it with clients that help serve their needs. We did that, of course, because we also work hard for the sales department.

The only sustainable advantage you’ll ever have over your competitors is to out-innovate them. That’s the challenge I bring every show I work with because I wish to create ideas that will cause talk for the talent so more people tune in.

Great ideas don’t always cost money (#showyourshot cost just a couple hundred dollars for the few bandages we needed to create the images to launch it on social media). Great ideas take an innovative spirit and the bandwidth to make it all happen.

No bean counter at Staples said no because of “all the millions it’ll cost us in laminations.” No lawyer at Krispy Kreme said everyone getting their free donut had to sign a release holding them harmless from a lawsuit in case they got a stomachache. Both companies simply saw opportunity to get a little free marketing from people like us in radio – a chance to become the story.

That’s what I am working on with every show I’m lucky enough to coach.

If we get back to doing this in radio, fans will need to be around us every day out of a fear of missing something.

And we all know what that does to ratings and revenue.

Name That Accent WTIC-FM, Hartford Salt and Christine, Christine Is a Bad Parent Scroll to top